"In this paper, we present MuTaTo©, a new personalized medicine concept for curing cancer patients. In the development of this concept, we have tried to address all of the factors that cause poor success rate in cancer treatment. We have designed experiments, that would show that the principles behind MuTaTo are sustainable."

AEBi Article in Pharmafile May 2019 (Pharmafocus.com)

In May 2019 PharmaFile (www.Farmafocus.com) published an article by Dr Morad and Dr Itzhaki about AEBi work.

Link to a PDF Link https://adobe.ly/2L0JspQ

The effect of several peptides on the phosphorylation levels of human EGFR in A431 cell line was assessed by ELISA test: Exponentially growing A431 cells were seeded on a 96-well plate, and grown for about 3 days. Following medium exchange, solutions containing 50 mg/ml EGF and 0.2 mg/ml peptides were added. The plate was incubated for 7.5 min at 37 ºC. The medium was removed, the cells fixed, and the plate washed with Triton washing solution. The level of phosphorylates was assessed by incubation with phospho-EGFR (Tyr1045) antibody as a primary antibody, and Anti-rabbit IgG as a secondary antibody. The ability of different peptides to inhibit autophosphorylation of EGFR is presented by the decrease of the fluorescent signal (Y axis). 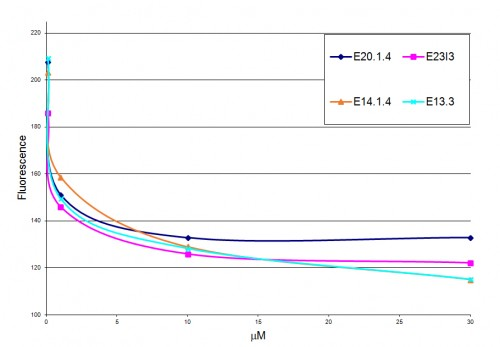 EGFR antagonist peptide, attached to PEG, was labeled with Fluorescein, and injected intravenously to 5 Xenograft mice, bearing subcutaneous NCI-H1650 tumors (lung cancer that overexpress EGFR). The 6th mouse served as time 0, and was injected only with saline. Each mouse was subjected to anesthesia, perfusion and organ collection at a specific time point. The organs were homogenized in a volume of solution proportional to their weight, and spun down. Fluorescence of each sample was measured.

As can be seen, our peptide reached its targeted tumor cells, and accumulated there, unlike in the kidneys and the liver, where its concentration went down again. 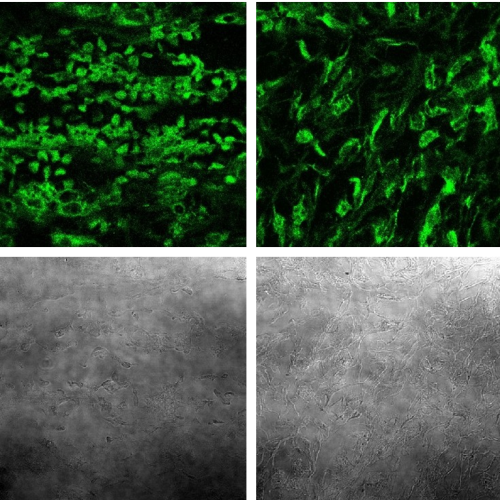 We have synthesized a molecule that contains several copies of EGFR targeting peptide, which are bound to several copies of two different toxic peptides. We have tested the effect of this molecule on two kinds of cancer cell lines:

As can be seen in the photographs, at concentrations above 3 micromolar, all A431 cells lost their tissue-like structure, and died. The partial negative control - survived. 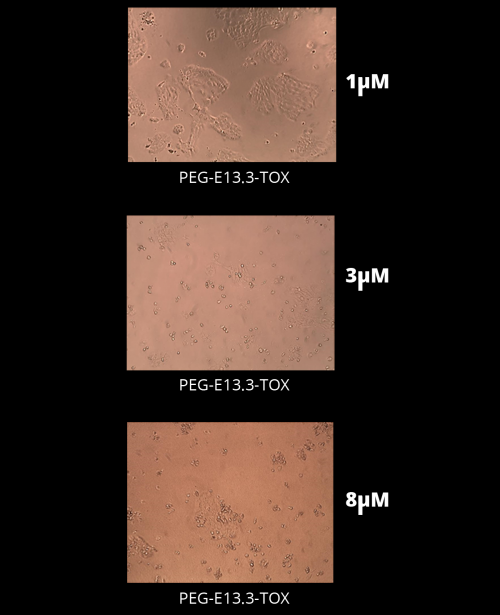 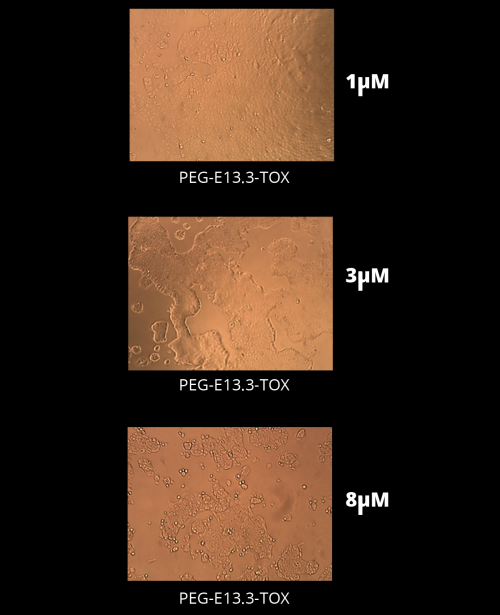 Mice experiment was performed by Envigo (www.envigo.com – well reputed international company). In this experiment we induced xenograft tumors of A549 (Human lung cancer) in 12 mice.

Only after the tumors were established (solid tumors) six mice were treated with MuTaTo.

That MuTaTo contained for the first time three different targeting peptides and one kind of a toxic peptide.

The other six mice served as a control group. They were treated with saline.

We gave 3 IV injections per week, for three weeks, and continue following the tumors for another week.

It is important to emphasize that the MuTaTo was injected to the tail vein of the mice not to the Tumor.

The results showed that the tumors development was inhibited in the test group, comparing to the control group.

Even after we stopped injections the tumors did not regain their accelerated rate of development.

AEBI LTD. ANNOUNCES THAT THE UNITED STATES PATENT OFFICE HAS ISSUED A PATENT FOR ITS DRUG DISCOVERY PLATFORM

TEL AVIV, ISRAEL – (December , 2018) – AEBI Ltd. (“AEBI” or the “Company”), a preclinical-stage biopharmaceutical company developing novel lead molecules for the treatment of certain types of cancer and many other diseases, today announced that the United States Patent and Trademark Office (USPTO) will issue a patent for the Company’s drug discovery platform technology. US Patent No. 10,160,967 entitled Methods and Compositions for Identifying a Peptide Having an Intermolecular Interaction With a Target of Interest is due to issue on December 25, 2018.

“This important patent in the United States augments the robust intellectual property position we are building globally. AEBI has been granted patents and has filed pending applications in major markets including the U.S and European Patent Office. We continue to strengthen our intellectual property portfolio through new patent filings on the most recent inventions, including peptide molecules identified by use of AEBI’s proprietary platform technology,” stated Dan Aridor, Chairman of the Board of AEBI. “The US is one of the largest markets in the world for development of peptide drug molecules, especially designed to provide solutions for diseases with few effective treatment options available. We look forward to developing peptide-based drug leads as a potential treatment to serve these unmet needs.”

AEBI’s Drug Discovery technology provides a method for identifying peptide molecules which have an interaction with a target of interest. Simply stated, AEBI’s technology can identify new molecules that should be able to increase a desired interaction or to diminish or prevent an undesired interaction. Sometimes the peptides themselves may serve as potential drugs or they may serve as a basis for improved drug designs.

This  invention provides a recombinant bacteriophage virus libraries,  wherein each virus contains a protein involved in viral attachment or infection, a polypeptide which differs by at least a single amino acid from another peptide or polypeptide in the library, and a modified cleavage site that is proximal to the peptide and the protein. The cleavage site is modified such that a compound mediating cleavage has a reduced binding affinity for it as compared to a non-modified cleavage site. The invention further involves a “target of interest complex” comprising a protease, a target of interest involved in an intermolecular interaction, and a flexible linker that attaches the protease and target of interest. This complex technology provides a method for identifying a peptide which has an interaction with a target of interest or identifying the agonistic or antagonistic feature of a peptide that has an intermolecular reaction with a target of interest.

AEBi, Based in Nes-Ziona, Israel is a development-stage biopharmaceutical company engaged in the discovery and development of therapeutic peptides, was established in the year 2000 in a technology incubator at Weizmann Science Park, Israel. The company believes that the ability to discover novel therapeutic peptides has vastly superior advantages to many existing and trajectory technologies of drug development.

The 6th Drug Discovery Innovation Programme is all set to highlight the recent advances in research techniques for the Discovery and Designing of new drugs.

This Conference will bring together research scientists, medicinal chemists, CSOs, CEOs and educational institutions under one roof from all over Europe to discuss the latest scientific advances in the field of drug discovery & development that help to face current and future challenges in discovery research.

Dr. Ilan Morad, CEO, AEBi will be the Keynote Speaker at 6th DDIP on 29-30 November 2018 at Leonardo Hotel Frankfurt City – South & he will be imparting insights on AEBi recent results on its proof of concept for a revolutionary Complete Cure for Cancer.

AEBi solution is based on AEBi’s combinatorial drug discovery platform. Dr. Morad will discuss the advantages of AEBI solution both a generic and personal medicine. Recent trends are providing additional support to Dr Morad claim that a simultaneous coordinated attack on cancer cells based on the same structure- carrier via overexpressed receptors is the way to go.

The conference will feature opening and closing plenary keynote sessions, pre-conference workshop, interactive breakout discussion groups, and networking. It is an opportunity for leaders from large, mid-sized, and small pharma, biotech, vendor companies, and academic research centers to come together to share best practices and discuss the new era of AI-driven precision medicine.

More information about this event can be found at https://worldbigroup.com/confere…/sixth-drug-discovery/index 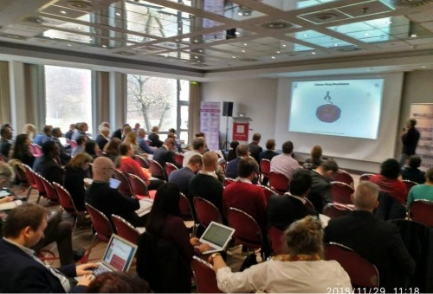 Following previous lectures in 2017 Dr. Morad was asked to present again in front of peers in the prestigious www.worldbi.com conference of Drug Discovery Innovation Program (DDIP#6). The conference was held on the 29th of November 2018. 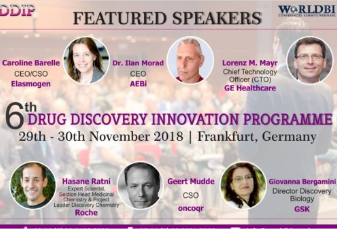 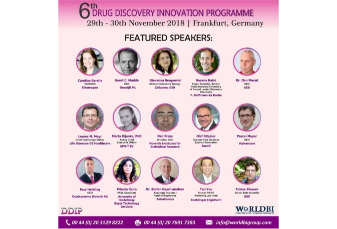 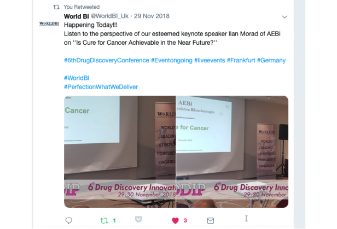 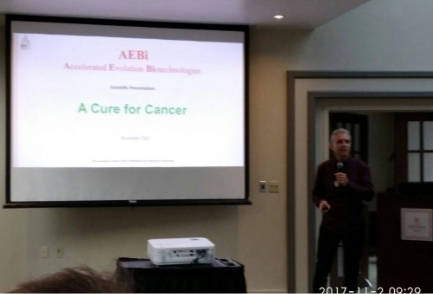 There is no clinical tryout at the moment of MuTaTo in Israel or outside of Israel.

Our team are research scientists (Ph.D.) and are not attending Dr.

We don’t have a Clinique and we can not advise nor refer to any specific case.

The treatment, in any case, has to be individually adapted to the patient.

We are a small team and have an influx of e-mail.

We try to answer at least initial emails but can not promise it.

This website may contain certain statements, estimations, projections, assessments and other information with respect to the anticipated future performance of the Company and/or its market and involve risks and uncertainties. Actual results or future business decisions of the Company may differ materially from any expectations, projections or predictions made or implicated in statements made in this website. While the Company believes that the information contained herein is accurate, it expressly disclaims any and all liability for representations or warranties, expressed or implied, contained in, or for omissions from, this website or any other communication transmitted or made available herein. Any prospective website user acknowledges his/her responsibility to perform a due diligence review prior to consummating a transaction with the Company. Included in this website are certain declarations by the Company with respect to its anticipated future performance. These declarations are based on estimates and assumptions by the Company that are subject to economic and competitive uncertainties beyond the control of the Company. The Company does not provide representation or warranty with regard to the declarations and there can be no assurance that the future results will be realized or that actual results will not be significantly different from those projected. The Company is not obligated to update or revise any future declarations. The Company and its respective affiliates, directors, officers, employees, consultants and representatives expressly disclaim any and all liability relating to or resulting from the utilization of any information contented in this website. The Company does not have any obligation to provide with access to additional information.